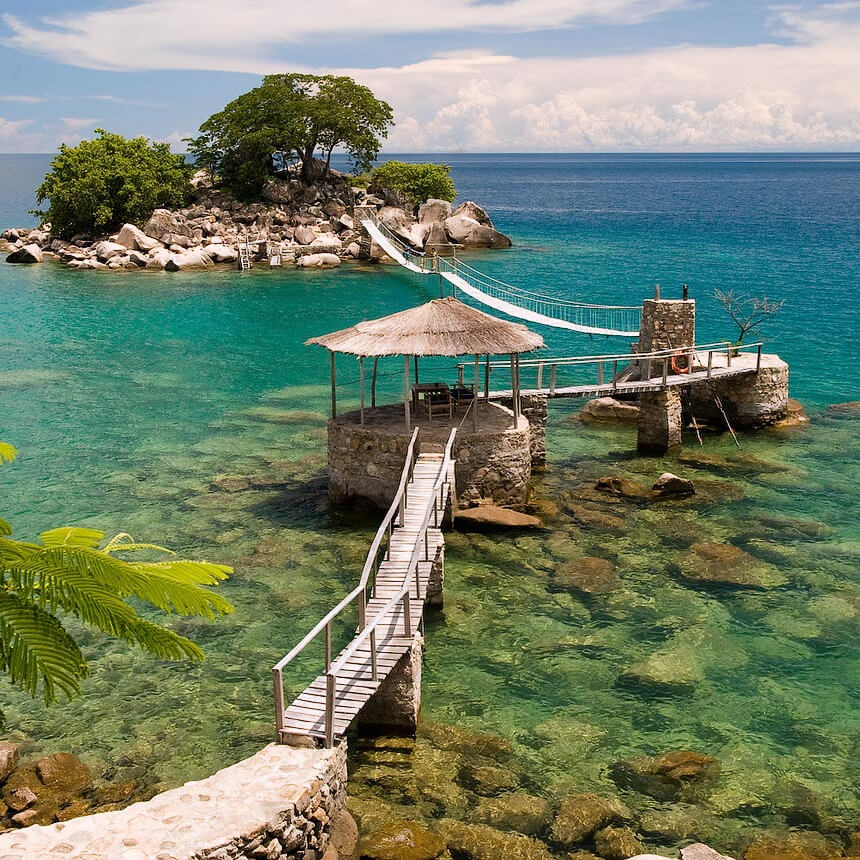 Malawi’s legendary welcome is there for all who wish to experience the unrivalled combination of Lake, Landscape, Wildlife & Culture in one of Africa’s most beautiful and compact countries. On this special Embrace SA Tour to Malawi you will discover and explore Lilongwe, Nkhoma, stunning Lake Malawi and the fascinating Liwonde National Park.

Described as the ‘Warm Heart of Africa’, this relatively little-known gem of this diverse continent has so much to offer; wildlife, culture, adventure, scenery, and of course the third largest lake in Africa. Lake Malawi is the jewel in Malawi’s crown. With tropical beaches and an array of water sports, the lake is also home to some of the rarest and most beautiful fish in the world.

Where else will you find such a genuinely warm welcome in a country at peace with itself?

THIS 11-DAY/10-NIGHT TOUR STARTS ON A FRIDAY AT O R TAMBO AIRPORT IN JOHANNESBURG AND ENDS ON A MONDAY AT THE SAME AIRPORT.

PRICES INCLUDE RETURN AIR-TICKETS TO MALAWI

We depart from OR Tambo Airport to Lilongwe (10h00 – 12h20), the capital of Malawi. After our arrival and after clearing customs, our bus takes us through the city (the airport is situated north of Lilongwe), while we enjoy the interesting and contrasting character of this unique Africa-city with its extremes of traditional Malawi on the one hand, and the ordinary architecture of a modern African city on the other hand.

While traversing the Lilongwe river in the center of the city, we might see people doing washing down below in the river and even bathing (casually without any clothes), while their modern counterparts would be struggling in the dense traffic over the bridge towards the other side, where one will be able to find multistory buildings and (even South African) retail stores scattered all over the central business district.

Nkhoma: And then on with the road to Nkhoma. We have two sleepovers in this interesting town. Although traditionally the main “mission station” of the family of Dutch Reformed Churches (DRC), originating from mission work in the late nineteenth century from South Africa, it however is not the oldest. The oldest being Mvera, which we shall drive through on our way to Lake Malawi on Sunday. In 1954 the DRC united with the Presbyterian churches in Malawi (of Scottish origin) to establish the Church of Central Africa Presbyterian (CCAP). The CCAP has three synods in Malawi. Livingstonia-synod to the north. Blantyre-synod in the south, while the Nkhoma-synod holds the central region of the country.

So Nkhoma is historically speaking, the geographical headquarters of the synod. We shall be staying over in the guest house, which years ago served as the children’s home (kinderhuis) for the missionary kids from the other mission stations in the synodical area, while they atend school at Nkhoma. Amongst other things to do, we are going to visit the local hospital (always an unforgettable experience), the Saturday market, the Christian graveyard, museum and more. After (partly) attending the Sunday morning service (it can become quite drawn-out), we shall leave for Lake Malawi.

Senga Bay: From Nkhoma, via Lilongwe, the road ascends to the plains of Lake Malawi in a spectacular way, with numerous curves. On our way there, we shall take a slight detour to visit the monument on Kasu Hill mountain, commemorating the first translation of the Bible in Chichewa (on that very spot), which was first published in 1922. From the height of the mountain, we shall have a beautiful view down on the oldest mission station (Mvera) with the lake in the far distance. Then on to Salima, the main business center of Senga Bay, with its numerous informal shops lining the road to our destination, the Sunbird Livingstonia Beach Hotel on Lake Malawi. Here we shall have our first experience of the lake, which always leaves a lasting impression on everyone ever visiting this tranquil body of water. The next day we shall commence our journey to the south, to Monkey Bay.

Monkey Bay  On our way to Monkey Bay, we shall visit Kungoni Centre of Culture and Art near Mau Mission (https://goo.gl/maps/m3FCNDnAxsj), which was the brainchild of a Roman Catholic priest, himself being an artist and anthropologist, were one is able to experience an authentic encounter with the Malawian culture like no other in the country.

From there on our journey takes us to Monkey Bay. Here we shall stay for three nights, being able to experience the traditional life along the shoreline of the lake, as well as on the lake itself. Those who wish to, can go on a boat trip, visit an island, or swim and do snorkeling at leisure. And gradually you will realize that going slowly becomes part of your own psyche.

[all breakfasts are included, no lunches and only supper on Wednesday May 13th]

Liwonde Nasionale Park (YouTube video): After leaving Monkey Bay, our destination is the well-known Liwonde Nasionale Park, generally considered to be one of most satisfying experiences of wild-life within parks in Africa. This national park is situated on the eastern banks of the Shire River, which is the only river draining Lake Malawi to the south, following its way to the mighty Zambezi River.

Because the river is the lifeline of the animals, we are sure to have many good sightings of even the Big 5 as well as hippos, buffalo, elephants, hyenas, leopards and even lions. And, of course, numerous antelope and birds. It is without doubt going to be an unforgettable experience, with lots of options, like going on a hike in the park, or a game drive, or just sitting down and observe the animals going their way in their natural habitat. Accommodation  Kutchire Lodge

Blantyre: Unfortunately, after three nights in Liwonde National Park, we must leave. Like all traveling in Malawi (and in general in Africa), while the distances may not seem to be that far, the traveling time is always a challenge, like our journey to the main center of southern Malawi, the city of Blantyre. Here we shall have one sleepover before we leave the country, but not before we pay a visit to the majestic Presbyterian cathedral (as if directly imported from Europe) – one of the partnership churches of Nkhoma synod.

Monday May 18th our flight leaves from Blantyre, Chileka airport, back to OR Tambo in South Africa (12:55 – 15:10) – and we all realize that we’ve been privileged in having had an unforgettable, genuine African experience.